Editors note: Based on reports I’ve read in various doggy internet chat rooms (“Leash Laws Suck” and “Chihuahuas for Trump” are two examples – the latter one having only 2 members) Coach is having a high time in Colorado and has asked Marge and Jack for permanent resident status in Boulder. Joyce was devastated when she heard this news, however, I am confident that after a few more days with Marge he will be begging for a return to the old man and his rig.

This year’s Lilly Fest was another resounding success with over $10,000 in donations made to the Parent Project for Muscular Dystrophy (PPMD) on behalf of Noah. The highlight of the evening occurred when the Tikis played “Like a Rock” and “Happy Birthday to Lilly” during their last set. Woody and I could feel the love that was infused into everyone that joined in this celebration. I’m certain that Noah and his mother were listening and smiling.

After a morning walk around the lake we break camp and head into Leadville for a brief tour of this classic mining town. Highlights included lunch at a hot dog stand (me and the old man only); a visit to an historic Synagogue and a chat with an unemployed miner who will be voting for Trump.

A four hour drive over two mountain passes brought us just south of Denver where we visited his good friend Sue who is dealing with a gleoblastoma (the same tumor that Lilly fought 10 years ago). Sue attended the 2014 Lilly Fest and was diagnosed two weeks after returning home. Please send her some love.

We then drove to Boulder where he skillfully backed the rig into Jack and Marge’s driveway (skillfully not my word) and unloaded me for a three week stay while he and Joyce return to Annapolis for the 10th annual Lilly Fest and Alison’s wedding. Jack and Marge have a great dog (Gizmo) and a fenced yard with plenty of squirrels to chase. This will be a fun visit and as long as they feed me on time and let me hang on their couches during the day.

This is the day I’ve been looking forward to since New Orleans, the return of my favorite female, Joyce. Notice I left the door open for a favorite person because he actually does feed me most of the time and that’s a big deal for a dog.

We picked her up in Albuquerque on Memorial Day Friday so the only place to stay was an airport Sheraton with a nice pool and extremely dog friendly (dedicated dog floor, no extra charges for the old man and plenty of bushes to pee on).

We drove to Durango via Santa Fe, NM and Pagosa Springs, CO. Nothing much happened in SF and PS was so crowded they bagged the hot springs and took me for a really cool walk along the river.

I’m not a happy dog right now as they’re rounding me up from exploring Steve’s neighborhood which, by the way, is chock full of fun animals to chase including six horses in the neighbor’s “yard”.   Once they tracked me down Joyce proclaimed no more free running for me as I never seem to hear my people calling when they want me to stop having fun (see the preface to this blog for the scientific reasoning for this trait). It saddened me to say good-by to Sky again, but being a dog I got over it in about two minutes as the mountain scenery shot by my open window.

I’m back in the back seat again (he lets Joyce have my space in the front while she’s here, looks like I’m not top dog anymore – he’s not so stupid after all).

We head north on CO 550 to Silver City, 60 miles from Durango but light years more “in-between” as in a population of 660 and the place gets snowed in during the winter as the only access is via three mountain passes each over 10,000’. We pass through town in about 10 seconds going 15mph and turn right on county Rd 2 for the seven mile dirt road drive to Eureka, a ghost town that was once home to the Sunnyside Extension gold mine developed in 1874. The mine operated almost continuously for 130 years. Our campground was located on the old town site and only scattered foundations and one restored water building are all that remain.

Well Joyce’s “no-off-leash” edict lasted about 10 minutes at the campground as we were the only campers in residence out of 50 possible sites and there was no traffic to freak them out. I had a blast sniffing a combination of animals and discarded camp food; this is basically nirvana for me and somehow I don’t miss Korte’s place so much.

We spent two great nights at the Eureka Campground with some Silver City town walks and a 4×4 day trip to Animas Forks thrown in to keep us active.  Animas Forks is yet another abandoned mining town (ore depletion being the reason everyone left in 1926 after just 10 years of production and milling. Someone lost a ton of $ on that venture).

I wasn’t aware of how religious my people were until we made the 26-mile drive from Silverton to Ouray, which crested over the 10,600’ Red Mountain Pass. Joyce did her best to keep him focused on the two-lane switchback road constantly berating him for trying to check his phone for the Orioles score while 1,000’ below the Animas River was waiting for one slip of the wheel. They both invoked the names of various Jewish and Christian deities (he even threw in a Buddha reference on a particularly tight turn). I insisted on having my window open in order to eject myself from a potentially tragic situation; I have also insisted on a double dose of doggie tranquilizers before our next mountain pass adventure (he bought a big supply in Vegas but I haven’t seen any yet).

Ouray turned out to be well worth the effort as the following photos demonstrate:

Steve’s son Cole was camping with his geology field class at the Green River KOA so we stayed the night next door at the Shady Acres RV Park, a very unassuming plot of ground with electricity, water and a hole in the ground to dump your poop from the holding tank (just like a pump out boat for all you nautical types but no pump required).

Steve and Sky will head home tomorrow and we continue on to Moab, UT for some big town living, relatively speaking.

This city RV Park is not very exciting. We opted for the least expensive space with no hookups and neighbors 18” from the picnic table. He said it’s ok as we were within walking distance of three microbreweries and a good Italian restaurant. I wasn’t invited to either of the above so there will be no reporting on his activities inside the establishments. I think it’s safe to say he mostly ate, drank, watched sports on TV and made the female patrons within conversation distance nervous.

The next morning we drove the few miles to Arches National Park which increases the credibility of this adventure as it’s the sixth national park and there hasn’t been a Walmart sighting in weeks; also no RV repair shops as well. 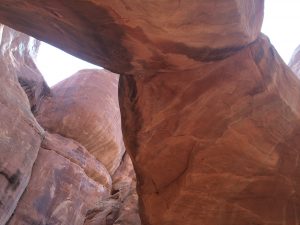 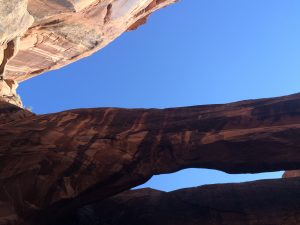 We escape the big city (Moab) and head south to Canyon Rim country between Arches and Canyonlands National Parks. This place is a significant upgrade from Slickrock RV Park in Moab…we share this BLM campground with one other camper and our site is perched above and flat wide valley springing to life with wild flowers. A 200-yard walk over the slickrock (why do they call it slickrock, he asks, when it’s medium grained sandstone with a grip like sandpaper? – this is one of his old man rants that fortunately doesn’t offend most people, although it does annoy his camping companions, but that’s another story).