Before we move on I don’t want to hear anymore cheap shots about my spelling, after all I am a dog and this keyboard was not meant for my paws; in addition my hot shot editor almost had to repeat 5th grade due to F’s in spelling and penmanship (what’s penmanship you youngsters ask?)

Now back to our story…

The score is beginning to improve: RV shops 3, tire places 1, National Parks 2 and no Walmart parking lots since Texas.

We arrived late yesterday afternoon after 5 hr drive north from Tempe. We both feel safer now that he had a backup camera installed on the trailer. Now we can watch on our 7” screen as irate drivers doing 85 mph approach our rear end as we lumber along at 57 (he’s trying to save gas but I think he has a death wish). At least no one’s flipped us the bird yet.

We were both wide-awake at 5 this morning in anticipation of our first look at the Grand Canyon. I actually think he had a tear in his eye when we reached the rim (he claimed it was dust but I think the grandeur of the canyon and a thought about Noah combined to briefly overwhelm him). I was very excited as the 14-mile rim trail is paved and dog-friendly, although he had to pull me back to the trail a few times when I started chasing wildlife near the rim (don’t tell Joyce). 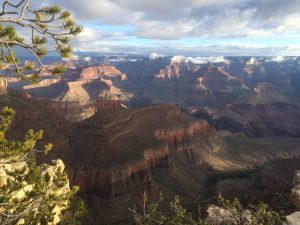 After 10+ miles of trail hiking  yesterday(fit bit-verified) I was again ready to go when he started the coffee at 4:30 am in preparation for a sunrise photo opp. The temperature was below freezing and it was blowing 20kts from the north when we piled into the jeep at 5 headed for the “Duck on a Rock” overlook, famous for the rock hoodoo (that’s a geologic term meaning tower – geology – the most sophisticated of the sciences) in the foreground and the barbed summit of Vishnu Temple in the distance. 25 poor to mediocre pictures later he finally decided it was time for my walk and we headed off-trail a bit for some more exciting views.  I made my usual lunges toward the rim chasing birds etc. but he wouldn’t let me get too close thus spoiling my work time (it’s my job to seek out birds).

My goal is to force him to walk me at least 10 miles a day whenever possible. So far we’ve hit the mark only twice, yesterday, and one day in west Texas when he ran out of beer and the Walmart was closed and we had to walk into town (we never came close to 10 miles in Tucson as the Peak’s had a huge dog-friendly couch and plenty of beer, wine and tequila, plus Gordon and Lisa are both great cooks) .